Understanding My Value and Worth: Now, How Do I Get Paid?

Categories: In The News, Selling Services

What am I worth? This was the recurring question in my 20s. When I first got out of college (1972) I was sure that making $50,000 meant I’d died and gone to a material-heaven-on-earth. That was a lot of quantitative easing, government spending, and inflation ago…

I had done a lot of things to earn money growing up, leading me to an important understanding of how the value of what you provide corresponds with the price you charge. At 13 years old, I worked for my father’s industrial painting crew, working on overhead truss bridges in small towns in southern Indiana. Outrageously hot and humid, especially while hauling five-gallon cans of paint and water to the crews under radiating steel girders. Doing this for four summers persuaded me to not take over the family business…

In college I found work as a professional musician. I was a fairly accomplished classical guitarist, performing for $50 per gig for a few hours of music. When I graduated, finding a job was not easy. For a while I worked building handcrafted wooden executive desks and as the news director for a Rock ’n’ Roll radio station. Both positions paid very little, and frankly, I quickly got tired of knowing where Mick Jagger was last weekend.

So I decided to go to graduate school. I learned a lot about being a think tank facilitator but was not happy with the idea of becoming a lifetime bureaucrat. So my wife, Katherine, and I moved to the country. She became an Assistant DA, and me… well, I would figure it out eventually.

Don’t get me wrong: I was busy. I did charity work at a prison, taught music lessons, and helped raise our 3 children. I also kept busy learning about microcomputers - I could see they were the future.

What drove me into my career was the horrid recession of 1982 and 1983. With unemployment in our area higher than during the Great Depression, these were very hard times. I started to help local businesses figure out what to do, and after seeing success, I thought, “I should be charging for this!”

While helping these small companies for modest fees, I came to the realization that large companies in the technology sector were in the same boat. I also recognized that many start-ups in this field were created by programmers and technologist with limited understanding of how to run a business. 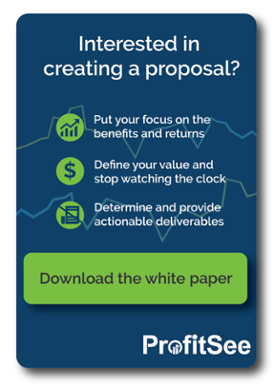 Fixing broken things is addictive to me. Seeing how I could help these breaking and broken companies was irresistible. I started to prospect in a more elegant way. I began by researching the company, its product/service offerings, the real distribution channels, and the challenges faced in their market.

Next, I’d craft a letter to the CEO showing my insights and summarizing challenges they were facing. I would let them know that I would be near their office soon and would love to meet them over a cup of coffee. Thus began my career as a transition and turn-around specialist.

In 1983 I persuaded three companies in Silicon Valley to cover my expenses for a complimentary review visit, but how and what to charge was still not clear. I found a mentor, a wonderful person named Ted Brown, to help.

Ted helped in lots of ways. But most importantly, he helped me understand my true value, one of the most difficult aspects to providing services. The first hard lesson Ted taught me was to never charge an hourly fee, because hourly billing makes clients become clock watchers, rather than results and return watchers.

Next began an interesting series of stark realizations. Ted suggested I charge a “day rate” to large corporate clients at $1,200 per day. This was 1982, in the midst of the nation’s worst recession since the 1930s. Assuming an eight-hour day, this was the equivalent of $150 per hour. Yikes! I needed to learn to present my value in a calm and secure way.

The question was, would they pay?

Yes, they did! Over the years I have not closed every opportunity; sometimes the prospect does not understand the value proposition, but those types of clients are not the right fit. At last I got it: My value was measured in how much I was providing and how much my clients received for my services.

But was charging per day the right approach? The answer was NO. I know this because I had engaged a business, run by a couple that had been stuck at a revenue ceiling for 13 years. They were doing okay but were very frustrated in not being able to expand the business. They asked me to spend 4 days per month with them on site.

My mistake was not defining the definition of a “day.” After accepting the offer to stay in their luxurious estate, I quickly learned that they were early risers and late to bed. In their mind, since I was at their home, the day started at 6:00 a.m. and I had to beg off at midnight. That’s right, 18-hour days were what I had unknowingly agreed to.

Did pumping me for information, insight, and strategy that many hours in a day really speed up their progress? Absolutely not: there is a limit to how much the human brain can capture in any given time cycle. This is why not studying in college and cramming for finals does not breed 4.0 GPAs. In this case, the truth was irrelevant. It was my client’s perception of value that took control. Despite this, we generated a 250% increase in revenue over three years, but they were one of the most challenging clients I ever worked with.

So, I discovered the hard way that billing hourly or daily was not the right approach. The client’s perception of value was the most important part of the equation. I began exclusively billing on a monthly retainer. This is the only effective way to take my client’s eyes off the money, and onto the benefits and returns on my service.

In summary, what did I learn when I was young? You can never undervalue yourself; the value of your services comes from what your client receives. Billing needs to based on value - not time. And, of course, a brilliant proposal is only worth its weight if you follow through on your promises.

When we built ProfitSee, we used this same model. We want you to be a CFO-level advisor to your clients, and we want to help you every step of the way with training and assistance. If you are able to help your clients with their financial goals, forecast their cash flow, and strategize next steps, you will help change their future. And if you are able to do this through smart tools, like cloud accounting and ProfitSee, it makes it more efficient and easier to price your services based on value, not time.